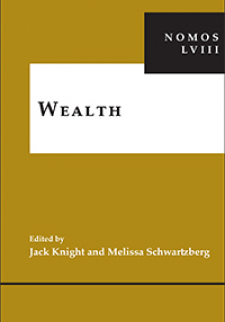 Wealth, and specifically its distribution, has been a topic of great debate in recent years. Calls for justice against corporations implicated in the 2008 financial crash; populist rallying against “the one percent”; distrust of the influence of wealthy donors on elections and policy—all of these issues have their roots in a larger discussion of how wealth operates in American economic and political life.

Here a distinguished interdisciplinary group of scholars in political science, law and philosophy address the complex set of questions that relate to economic wealth and its implications for social and political life in modern societies. The book offers analysis and prescription including original assessment of existing forms of economic wealth and creative policy responses for the negative implications of wealth inequality.