Defending the Constitution Against All Enemies, Foreign and Domestic

During his time in the Army, Gen. Dempsey commanded the 3rd Army Calvary Regiment, was Commanding General for the 1st Armored Division Combat Operations in Iraq, Commanding General for Multi-National Security Transition Command in Iraq, Acting Commander and Deputy Commander of U.S. Central Command, and Commander of U.S. Army Training and Doctrine Command. He served in both Operation Desert Storm and Operation Iraqi Freedom accumulating 42 months in combat. In 2011, Gen. Dempsey became the Chief of Staff of the United States Army and then, 149 days later, became the Chairman of the Joint Chiefs of Staff until his retirement from the Army in 2015. General Dempsey is a 1974 graduate of West Point and has Master's Degrees from Duke in Literature, from the Army Command & General Staff College in Military Science, and from the National War College in National Security Strategy. He also has an Honorary Doctorate Degree in Law from Notre Dame University. General Dempsey's post-military career includes a teaching position at Duke University in public policy and leadership, as Chairman of USA Basketball, and sitting on the Board of Tragedy Assistance Program for Survivors (TAPS).

END_OF_DOCUMENT_TOKEN_TO_BE_REPLACED 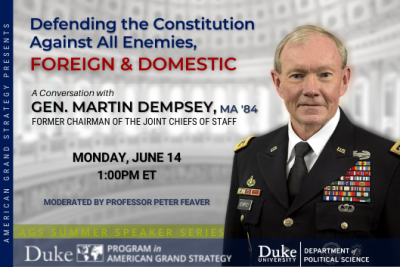