Twenty Years After 9/11: Lessons Learned Then and Now

Join us for a 9/11 anniversary event looking back on twenty years since the 9/11 attacks. Stephen Hadley, Former National Security Advisor to President George W. Bush, will discuss the lessons learned over the twenty-year period in a conversation with Professor Peter Feaver.

Stephen Hadley completed four years as the assistant to the president for National Security Affairs on January 20, 2009. In that capacity he was the principal White House foreign policy adviser to then President George W. Bush, directed the National Security Council staff, and ran the interagency national security policy development and execution process. From January 20, 2001, to January 20, 2005, Hadley was the assistant to the president and deputy national security adviser, serving under then National Security Adviser Condoleezza Rice. In addition to covering the full range of national security issues, he had special responsibilities in several specific areas including U.S. relations with Russia, the Israeli disengagement from Gaza, developing a strategic relationship with India and ballistic missile defense.

END_OF_DOCUMENT_TOKEN_TO_BE_REPLACED 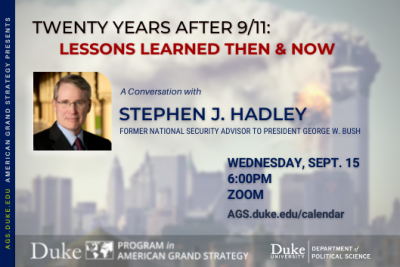