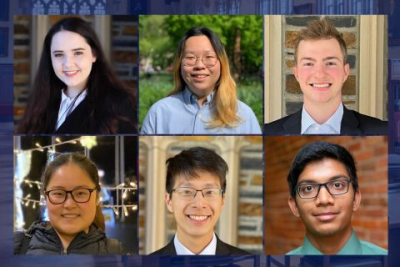 Six members of Duke’s Class of 2023 have been named to the second class of Nakayama Scholars.

The Nakayama Public Service Scholarship is part of the university’s efforts to encourage students to use their Duke experience to engage with the large challenges facing communities around the world. The students represent multiple disciplines across Duke’s academic departments as well as a variety of future careers.

“Once again, the Nakayama program will be graced with an incredible group of students. When I think of all of the issues and challenges facing our world, I’m heartened to work with students interested in public service, like these six, who will have a part in successfully tackling those matters and improving our societies,” said Chris Simmons, associate vice president for government relations and director of the Nakayama program.

In addition to paying one half of recipients’ tuition for their senior year, the scholarship includes a year of programming to help guide the students in fulfilling their interest in public service. The Office of Undergraduate Scholars and Fellows will administer this program, giving the scholars more opportunities as part of the wider community of merit scholars at Duke.

The program is funded by an endowment made by Yukio and Toshiko Nakayama. Yukio Nakayama graduated from Duke in 1941 and served in the U.S. military during World War II. He then dedicated his life to public service, in both a long career as director of Weapons Program Evacuation and Management Systems in U.S. Naval Ordinance, and in helping numerous young people further their education.

Alexandra Bennion is from Tampa, Florida, and is majoring in biology, with minors in chemistry and global health.  She plans on pursuing both medical and Ph.D. degrees as she researches rare and understudied women’s cancers, which disproportionately impact patients based on their race, ethnicity and socioeconomic status.

In her free time, Choi has served as photography director for The FLOW, a student run reproductive health research journal, been a resident adviser, a volunteer with the Puppy Kindergarten at the Duke Canine Cognition Center, and served as a college mentor through the FEMMES+ connect program.

Garret Goodman aspires to work with a nonprofit organization dedicated to eliminating food waste globally.  An economics major who will also earn a certificate in innovation and entrepreneurship, Goodman has served as a senior analyst in the Duke Investment Club, a project manager in the Duke Impact Investing Group, and finance chair of the Duke Business Society.

Shreyas Hallur is an A.B. Duke scholar from Phoenix, Arizona, double majoring in statistical sciences and public policy. Hallur is is interested in Medicaid policy and in improving the lives of people with autism who have intense care needs.

He is on the board of directors of a private school that serves individuals with autism and has served as a STEM adviser and research architect for the Southwest Autism research and Resource Center for nearly four years.

At Duke, Hallur is a Bass Connections researcher, a Margolis Scholar in health policy and management, and he is co-president of the Duke Disability Alliance and co-director for Disability Policy for Duke Student Government.  He has also done extensive research into Medicaid reform in Massachusetts, Arizona, and with the Center for Medicare and Medicaid Innovation. Hallur is also a student researcher at the Duke Autism Center.

Andrew Liu is mechanical engineering and computer science major from Missouri City, Texas.  He is a Pratt Fellow, an undergraduate student researcher with Bass Connections and a Huang Fellow.

Liu is passionate about advocating for and developing clean forms of energy. He has served as an undergraduate teaching assistant in the computer science department, and is the president of internal operations for Duke Conservation Tech. Liu also is involved in STEM Connect, which strives to inspire students from Durham in learning STEM, and DUKE ASL, where members learn ASL and about the deaf community.

Nellie Sun plans to eventually become a civil rights attorney. Originally from Vancouver, Canada, she is majoring in political science and history, while serving as the attorney general for the Duke Student Government.

She participated on the Duke Mock Trial team as vice-president, captain and treasurer. Sun has also researched voting rights with both North Carolina Asians Americans Together, and with the Race and New Southern Politics Bass Connections research group.