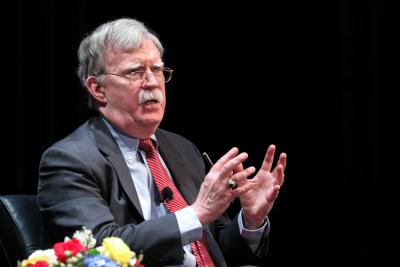 In the end, John Bolton didn’t reveal any explosive new details from his anticipated book about his time in the Trump administration.

But it wasn’t because political science professor Peter Feaver, who interviewed Bolton for an hour Monday night before a packed Page Auditorium, didn’t give him the opportunity.

Compared with other subjects he deals with in the book, which is due out March 17, Bolton said he viewed Ukraine and Trump’s resulting impeachment “as sprinkles on the ice cream sundae.”

Bolton said he offered to testify during the Senate’s impeachment trial if subpoenaed, but the Republican majority voted not to call witnesses.

He repeatedly cited the White House’s “prepublication review” of his memoir and threats of legal action as why he could not reveal contents of the book, “The Room Where It Happened.”

“(Trump) tweets but I can’t talk about it. How fair is that?” Bolton said.

“Help me understand why you can’t talk about it, because you can talk about it right now. This is a safe space,” Feaver said, prompting laughter and applause throughout the auditorium.

“I’ll have something to say about it later, but for now I’m going to let it go,” Bolton said.

Earlier Monday, Bolton met with Duke students. Before and during the talk, more than 50 students and others gathered outside the auditorium to protest U.S. foreign policy.
Bolton spent 17 months as Trump’s third national security adviser, a stint that ended last September. Bolton says he resigned; Trump claims he fired him over ongoing policy disputes.

When Feaver asked Bolton for his thoughts on Secretary of State Mike Pompeo, Bolton pivoted and talked about why he considers James Baker the nation’s best secretary of state.

Bolton, a veteran Republican diplomat whose experience dates back to working as an aide to former Vice President Spiro Agnew in 1972, did criticize Trump’s foreign policy.

Feaver challenged him, asking Bolton why Trump is wrong to try a different approach and meet with North Korean leader Kim Jong-un -- the person who makes the decisions.

“North Korea on four separate occasions committed to getting rid of nuclear weapons and never seem to get around to it,” Bolton said. “Their real intentions are to break free from sanctions. I think it has been a wasted two years.”

Asked why he joined an administration with a North Korea policy he didn’t support, Bolton again opted not to comment because of the book review.

Bolton called that review “censorship,” saying his goal is to write history and it should not be suppressed.

Bolton, who worked in the administrations of Ronald Reagan, George H.W. Bush and George W. Bush, criticized the 2015 Iran nuclear deal that Trump has rejected and said the U.S. killing last month of military commander Qasem Soleiman was long overdue.

“The Iranian people are now much more aware of the possibilities of a government they could have if this theocratic dictatorship could be removed,” Bolton said, noting how Iranians protested their government’s cover up after shooting down a Ukrainian passenger plane last month.

Bolton said China and Russia are the “long-term” national security concerns for the United States, and Iran and North Korea represent short-term concerns.

He said the United States’ policy toward Russia has not been strong enough, and that the Chinese government’s suppression of information related to the coronavirus “should tell you a lot about the regime in Beijing.”

On Iraq, he said allies should have removed former Iraqi dictator Saddam Hussein during the first Gulf War, and that Hussein’s nuclear program exceeded the intelligence on it when discovered during the second Gulf War.

Bolton said the U.S. should have returned as much authority as possible much earlier to the Iraqis.

“I would give them a copy of the Federalist Papers and wished them good luck,” he said.

“You don’t develop political maturity by doing” government for them.