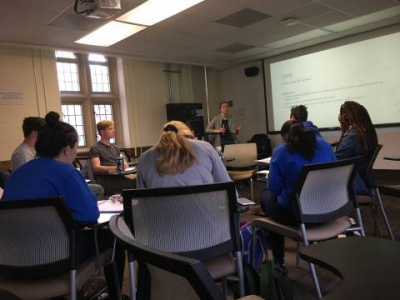 A white student asks: Was the criticism leveled at rapper Eminem racist when he came on the scene in the 1990s because he’s white in a predominantly black genre?

No, says political scientist Ashley Jardina. That’s because society does not treat white people -- including Eminem -- with historic, widespread discrimination simply for his skin color.

Such is the goal of the spring political science course, “Racial Attitudes and Prejudice,” which delves into work from sociology, social psychology and political science to explore the development of racial attitudes, stereotypes and prejudice.

Jardina’s course is among those aimed at better preparing Duke undergraduates to understand politics and how society influences voting.

“It seems to me there’s a lot more messiness than what people want to propose,” she tells her class, noting the academic mix of cognitive and socio-culture research on what influences racial attitudes.

The course looks at the way race matters for attitudes and behavior among all racial and ethnic groups, and how racial attitudes have changed over time. This includes social, legal and political changes in the United States, she says.

“Stereotypes become a landscape in which people navigate the world around them,” says Jardina, who has received wide acclaim for her 2019 book, “White Identity Politics.” “Go about your day and see if you can catch yourself doing this.”

During a morning class in the Old Chemistry Building before the closing of the campus, Jardina is challenging eight undergraduates to examine their own preconceived definitions of terms such as “prejudice,” “racism” and “sexism.”

“Can everyone be a racist?” she asks.

“I think everyone is,” says sophomore Griffin Catlett.

Senior Esha Shah, political science and economics major, shares that some of her friends don’t believe black people can be racist, while others contend they can in the form of “interpersonal racism.”

“Racism is something dominant members of society can do. White people can be racist but black people can’t,” Jardina says, adding that blacks can have prejudice. “Racism means one group is being subjugated.”

One of her goals is to clarify common terms that are misused.

“The term ‘racism’ we’ve grown up with is basically interchangeable with prejudice, but there’s an important distinction that matters,” Jardina says. “If you want to treat racism as simply a dislike for a different group, that’s prejudice, not racism.

“This is hard. I’m basically telling you the term you’ve used your whole life, maybe it is not the correct definition.”
Across Duke, others classes take different approaches to studying race, but share a similar desire to challenge students to explore common assumptions.

Deondra Rose is an assistant professor at the Sanford School of Public Policy and director of Research in Polis: The Center for Politics. In her course, Political Analysis of Public Policy, race is woven into discussions about structural inequality, social constructions of populations targeted by policies, and how various policies like the G.I. Bill and housing programs play out for different identity groups.

“My hope is that every student who graduates from Duke with a degree in Public Policy Studies will have a keen understanding of the prominent role that racial inequality plays in shaping politics and public policy,” Rose says. “Race-based disparity has long been woven into our society in ways that are difficult to correct without bold, intentional efforts. To effectively solve problems and help improve society, future policymakers and change agents must understand how structural inequality drives many of the chronic challenges that we face.”

Rose says many students already have an understanding of racial and other inequalities, though some are uncomfortable talking about such sensitive topics.

“For many students who have the luxury of not actively thinking about race on a daily basis, delving into issues like racism and structural inequality can evoke discomfort and feelings of being implicated,” Rose says.

“Talking frankly about racial inequality can make many people uncomfortable, so I was surprised when many of my students expressed that they wanted to learn more about race and hoped that I would provide more opportunities to grapple seriously with topics like structural inequality and structural racism in my classes.”

Sofia Labrecque-Nieves, a junior majoring in global health and public policy, took Rose’s class last fall. She believes the experience prepared her to be an empathetic leader.

“The environment was full of diverse opinions and productive discussion about the intended and unintended implications of race in a policy,” she says. “Having practiced that kind of intensive critical thinking applied to real policy every class, I felt well-prepared to take on future courses and personal missions while being mindful of the implications and impacts of race in many ways.”

Like the rest of academia, both classes have moved online.

The shift to teaching a class of 50-plus undergraduates using Zoom has largely been smooth, Rose says, thanks to the assistance of teacher assistants who break the class into smaller groups of 10 to discuss policy case studies, including a recent class that grappled with the politics surrounding COVID-19 policy efforts.

Same for Jardina, though she still prefers the chemistry of in-person discussions.

“The students have done an incredible job carrying on our important conversations since we have moved online,” Jardina says. “It is, however, really hard to replicate the depth of the discussion we would normally have in the classroom when we’re talking to one another online.”