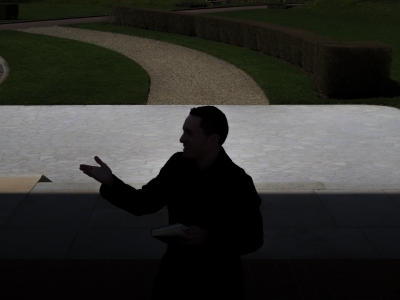 Sometimes I think Duke should have come with a warning label: WARNING: YOU ARE ENTERING A MAGICAL PLACE!

Here, beneath the spires of West Campus, on a still night, when the fog rolls in, it’s not difficult to imagine elves or fairies winking at you from shadowy archways. On such nights, you can almost make out the distant gallop of centaurs in the Duke Forest or the soft hiss of a friendly basilisk in the tunnels under East Campus. Duke is a magical place.

And if you widen your imagination, you might see that the deeper magic of Duke is not in our campus, but in the people who inhabit it. We’ve seen the magic of Duke in . . . the professors who opened up their lunch hours, their offices, and their homes to us . . . the friends who told us their life stories over late-night milkshakes from the Loop . . . the K-Ville residents who invited us in after our own tents collapsed or flooded.

At this point, you might be thinking: Graduation is upon us. We’re now adults. It’s time to “put away childish things.” It’s time to stop talking about magic. But magic abides with us, whether we believe in it or not. Did you know you’ve already been enchanted?

All of us have already been put under a spell. We’ve heard it said by adults of authority at gatherings like this one since we were in diapers. We’ve heard it repeated by preachers and politicians, teachers and university administrators, elderly relatives and idealistic friends, and we’ve taken it as an article of faith. The spell is simple. It goes like this: Our generation will be better. Our generation will be better.

The spell is especially enchanting because the failures of our parents’ generation seem so apparent. Lewinsky, Enron, Iraq, Church Abuse, Katrina, the Financial Crisis, Ferguson, #MeToo, and Cambridge Analytica—our short lifetimes have provided enough material for Billy Joel to write another verse of “We Didn’t Start the Fire.” In turn, these instances of dishonesty, incompetence, and cruelty have led to an unprecedented collapse of public trust in institutions. A recent poll showed that just nine percent of Americans approve of the job Congress is doing. Nine percent! That’s down to summer interns and blood relatives!

And so, growing up in an age of disruption and dislocation, we have been told that we will be better. It’s enough to lull us into complacency. We will be better. But will we? I don’t think we should assume.

One of the best things about coming to a place like Duke is the feeling of being enveloped by big dreams. One of the great privileges of my time here has been the chance to listen to your dreams—dreams of ending poverty and curing disease, of combating climate change and species loss, of discovering particles and planets, of healing racial and religious divisions, of reversing political polarization, dreams beyond number and dreams beyond words. These dreams speak to the magic of hope—a restless kind of magic that pushes us to the frontier of what we think we can accomplish.

And the magic of hope is usually the only mode of thinking that prevails on weekends such as this one. We are encouraged to “follow our dreams.” But what of the people whose lives “stand in the level of our dreams”? To honor them, and to honor ourselves, we should consider the magic of accountability.

As we begin our careers, there’s no small chance that our generation will come to resemble the generations we now criticize. And if we too begin to grow enamored by all the magical possibilities unfolding before us, if we start to say things like, “Don’t worry, mortgage-backed securities are an ironclad investment” or “Don’t sweat it, we have the post-invasion planning for Iraq all squared away,” we’ll need friends to turn around and ask us: “Really? How can you be so certain? Have you thought this through?” I hope we’ve made friends like that at Duke.

Magic confers the power to be world-builders. The generations that came before had their own brand of magic and built their own worlds. Some of those worlds are now disintegrating. But with the magic we’ve learned at this school, we too can conjure up worlds. I want to leave us with two questions: First, what kinds of worlds will we build? And second, will the worlds we build be kind?

May we honor our dreams.
May we hold each other accountable.
May we cultivate true friendship.
May we build kind worlds.
May we show the magic of Duke in all that we do and all that we become.

Warning: You are Entering a Magical Place