"Get the Terp Up Here!" War as an Interpreter to U.S. Forces in Afghanistan

Please join Professor Kyle Beardsley in a conversation with Afghan interpreter, Nasirullah "John" Safi. When Afghanistan fell to the Taliban, many Afghans who previously worked with U.S. forces were left stranded and in danger. This discussion will explore Safi's personal stories of working with the U.S. military to fight the Taliban and the dynamic culture and dangers facing Afghan interpreters.

Nasirullah "John" Safi was born and raised in the war-torn country of Afghanistan under the Taliban regime. Safi joined the U.S. mission in his teens and served both Afghanistan and the United States. He worked for both U.S. military personnel and civilians working in government agencies before he immigrated to the U.S.

END_OF_DOCUMENT_TOKEN_TO_BE_REPLACED 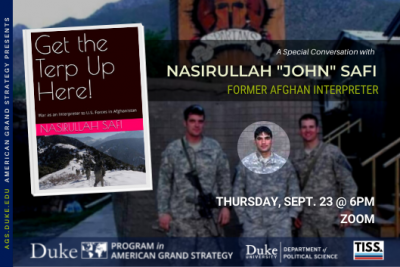