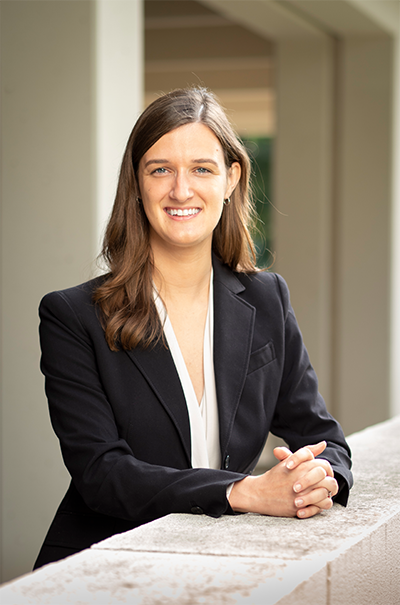 “It was there where I spent a lot of time reading about these big classical debates about international security and thought a lot about America’s role in the world from an international perspective,” says Myrick, who this fall became an assistant research professor in Duke’s political science department.

Those long-standing theories and concepts were upended in 2016 with the election of Donald Trump as president of the United States, she says.

“Trump got elected and thinking about how partisanship affects international relations became more important than ever,” she says. “It solidified political science as an area exploding with research opportunities.”

Before her time at Oxford, as an undergraduate Morehead-Cain Scholar at the University of North Carolina at Chapel Hill, Myrick thought she might pursue a career in journalism or nonprofit work related to international development. She had spent some time in Rwanda and Cambodia, studying civil conflict and political violence.

Then she took political sciences classes at UNC. That gave her clarity and a career path: Academic research in international relations.

Today Myrick is also a Ph.D. candidate in the Department of Political Science at Stanford University, and a senior scholar at the Carnegie International Policy Scholar Consortium and Network.

In fall 2021, she will begin as a tenure-track assistant professor at Duke, as part of the Security, Peace, and Conflict group.

In the coming year, she’ll focus on her dissertation and writing. Some of her research during graduate school has been published in major political science journals.

Specifically, Myrick researches how partisan polarization affects foreign policymaking in democratic states, with an emphasis on U.S. national security policy. Myrick is also interested in the interplay between domestic and international politics in matters of security and conflict.

She’s writing a book about how partisanship is affecting foreign policy among democracies and how that divide “is making us rethink the way democratic states have advantages in foreign policy.”

“I’m interested in how extreme polarization complicates that kind of wisdom,” Myrick says.

“It’s very nice for me because the university dovetails my American foreign policy interests, sort of on the practitioner side of things, with this great, really reputable political science department,” Myrick says.

“I love Durham so I am super excited to be here,” she says. Myrick recently bought a house in Durham –- a significant upgrade from her small apartment in San Francisco, she notes.

With so much uncertainty pinned to results of the November presidential election, Myrick is particularly interested in how foreign policy could change depending on who wins.

“I am interested in partisan debates about international cooperation and conflict,” she says, adding that undoing a previous administration’s foreign policy for partisan reasons can prove “dangerous.”

“Successful foreign policy-making is predicated around the idea that you can make and keep these formal commitments over time,” she says. “If a leader has partisan incentives to undo the policies of their predecessor, it has damaging impacts for America and our ability to make and keep commitments credibly.”

Myrick is also working on a paper on external security threats and domestic polarization, a topic she discussed when interviewing for her position at Duke.

“Intuition and the common conception is that major threats from foreign powers will reduce polarization -- people bind together against a common enemy,” she says.

But historically, there isn’t evidence that crises always heal a partisan divide.

Americans’ hostile and divided response the current public health crisis is consistent with her findings, she notes.

“So coronavirus happened, and you would think here’s a thing that should seriously bind us together. … I think there are a lot of parallels in the current environment – we see this huge threat emerge that, in principle, should unite but us, but instead it has revealed how polarized we are.”