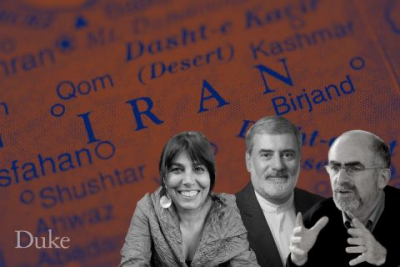 The recent death of a young Iranian woman, Mahsa Amini, while in the custody of Iranian authorities has sparked a massive wave of protests – both online and in the streets.

There are echoes of the past in this new wave of protests along with a very clear demand for freedom and bodily autonomy, three Duke scholars said Thursday in a virtual media briefing. (Watch the briefing on YouTube.)

ON IMPETUS FOR IRAN PROTESTS

ON FREQUENCY OF PROTESTS IN IRAN

Note: Kadivar is the author of more than 30 books in Persian. He was imprisoned in Iran for his political activism and has been in exile from the country since 2007.

“Over the past five years, Iranians have increasingly taken to the streets to protest. Protests over rising gas prices in November 2019. Protests over low-quality water in July 2021. Protests over the removal of bread subsidies in May 2022. And now protests over the death of Mahsa Amini and mandatory hair covering, and also freedom, in September of 2022. This is really increasing in frequency and I think it shows that Iranians are outraged with grievances that won’t soon go away.”

ON U.S. RESPONSE TO PROTESTS

“I think the Biden administration has a pretty full foreign policy agenda right now, particularly with the Russia war in Ukraine. Since it came to office it has been trying to re-establish, re-negotiate the 2015 agreement on nuclear non-proliferation and lifting of some sanctions.”

“It’s a balance to strike for an American president between being supportive of those seeking freedom and doing it in a way that doesn’t compound their problems. It’s a very tricky balance and not one you can absolutely predict where it’s going to go as it develops.”

ON LONG HISTORY OF WOMEN-LED PROTESTS IN IRAN

“Most historians of the contemporary social movements in Iran go back to the Iranian Revolution of 1979 that toppled a modernizing monarch in favor of an unknown future government that ultimately became the Islamic Republic of Iran. In that fight against the monarch, the Shah … women and men were shoulder to shoulder in the revolutionary movement. Women were in fact in the forefront in the demands for freedom and a different form of democratic and egalitarian government in Iran at the time.”

“Seeing women in revolt and at the forefront of an uprising for, essentially for freedom, is not unknown in Iranian history. The same thing happened in 2009 in the crisis after what was then thought to be the fraudulent election of Mahmoud Ahmadinejad.”

ON REASON FOR MORE FREQUENT PROTESTS

“Over 60 percent of the Iranian population is young. Less than 30 years old. So this is a very young population. The demands of the Iranian youth are exactly the same as the demands of other youth in other countries. The Iranian government (comprises) hardliners. Their goals are far from Iranian youth and Iranian population. So these protesters, most of them, almost all of them are young people. They experience a lot. They were detained. They were imprisoned in these recent protests. So by this rich experience, their family members are supporting them much more than before.”

“And also, their favorite national heroes, athletes and artists, are in the same vein.”

“They are so brave. They’re in the street. They’re chanting. This is not only about freedom for women. It’s freedom for the country.”

“They need freedom of a style of life. This mandatory style of life that the government tries to force to the Iranians – one of the particulars is about hair covering for women. This is exactly about freedom.”

ON PROTESTS, ART AND CULTURE

“In the moment of revolutionary fervor there is a real blossoming of expression, of creativity and expression in music and graphic design and in the arts. There is a lot of montage films that are being circulated online. Lots of new songs being written both inside the country and outside the country in honor of the martyrs and symbols of the revolutionary movement. This is one of the key characteristics of networked social movements today. Instead of someone being in leadership there is a symbolic reference to a person like Eric Garner, or Trayvon Martin. In this case it’s Mahsa Amini. There is usually this figure around whom the movement shapes its art, shapes its aesthetics.”

ON THE ROLE OF SOCIAL MEDIA

“I think it’s inaccurate to say that social media did not exist in 1979 or 2009. The Iranian revolution is characterized as the cassette tape revolution. The undisputed leader of the Iranian Revolution in 1979 used cassette tapes to record his sermons and distribute it in Iran. Young men would carry boom boxes on their shoulders in the streets in Tehran and boom these sermons from the sidewalks for everyone to hear. That was absolutely a form of social media.”

“The 2009 post-election crisis has been characterized by some as the Twitter revolution. … It was the first time everyone was watching a revolution, and they were watching it on Twitter. Granted, governments and big businesses were not on social media at the time, but a lot of the information, at least for the West, was distributed on Twitter. Images were posted on Flickr at the time, and videos were circulated on YouTube.”

“In 2009, CNN for the first time actually screened a YouTube video as a document of what was going on, on the ground in Iran. It was unheard of at the time. It was truly the beginning of a networked social movement. A way social movements operated on social networks.”

ON WHETHER THE U.S. MAY EMPLOY SANCTIONS ON IRAN

“No matter how much economic pain, whether it’s Iran or any other country, countries don’t say ‘Uncle’ to economic sanctions. So here I think that there’s not a sense that if we squeeze more, the government (of Iran) will change its policies. It may be more likely to make it crack down on the protesters more to show it can stand up to America.”

“Too often we use sanctions as the Swiss Army Knife of American foreign policy; when in doubt, impose sanctions. A lot of times, they hurt the people you’re trying to help.”

ON IRAN’S CLAIM TO BE AN ISLAMIC GOVERNMENT

“I think there’s a different understanding of Islam between Iranians and their government. The government are hardliners or fundamentalist Muslims. The majority of Iranians are not, and are this interpretation of Islam, or this practice of Islam. Most of Iranians, I can say, are traditionalists or reformists, but not fundamentalists. Less than 10 percent of Iranians were advocates of this regime and could be called something like fundamentalists.”

“This is the ruling of minority over majority.”

ON WHAT WOULD SATISFY PROTESTERS

“There’s a desire to live as they want and not just in the interior of their homes but outside as well.”

ON WHETHER THE U.S. WANTS IRAN REGIME CHANGE

“There should be no assumption here on the part of Americans that what the Iranian protesters want is to copy the American system. We’ve made that mistake a lot over the years.”

“Countries find their own way in how they balance a sense of community and individual rights. Their own culture and what freedom means. This notion that they’d want to be like us -- you hear a lot of that; it’s overly self-regarding.”

“I think the United States wants a government that it can find some shared issues with, whether it’s on proliferation, or regional issues. Iran is not the only problem in the region; far from it. There are many Saudi policies that contribute to it. There are Israeli policies and U.S. policies.”

“What form that takes, it’s not this regime. It’s made that pretty clear. But to the extent there was a change of power that allowed for trying to find some shared interests – and I really believe there are quite a few -- that would be desirable.”

ON WHETHER REGIME CHANGE IS POSSIBLE

“I think this is the question of many Iranians and many protestors. The desire of Iranians, the majority of Iranians, is regime change. We can see it in their chanting and their slogans.”

“When we ask of ourselves, is it possible today in this protest? I think this is … idealistic. This protest is a step forward. We are closer to freedom for Iran, closer to a better future for Iran. But we should understand the reality of this regime.”

“This is a revolutionary, young, authoritative, non-competitive electoral regime.”

“Since 2020, this is a noncompetitive, electoral, authoritative regime in the name of Islam. Before that we had two candidates in the presidential election. One from the reformist or moderate side, and one from the hardliner side. But since 2020, the leader decided to have a noncompetitive election. This is the election we had and (current Iranian President) Ebrahim Raisi came to office.”

“Iranians tried all the ways to reform their government. The government blocked all the ways. That means there’s no way for the people, except coming to the streets and protesting and making demonstrations.”

ON HISTORIC CRACKDOWNS ON IRANIAN PROTESTS

“When Khomeini came back to Iran from his exile in France in February of 1979, within a couple of weeks of his return, he made a pronouncement that women in governmental ministries should wear a hijab, wear a veil. What happened then was that the next day after this was published in the newspaper, women went to work and were turned back and were told they needed to go home and wear a head scarf, wear a hijab to go to work.”

“As they were each walking home to get their head scarves in order to come back to work, they met each other but were also met by men who were in support of this idea of women wearing the hijab, and were harassed by them on the street.”

“This is what fueled a 10-day women’s protest in March 1979. So I do think that any act of power leads to multiple acts of counter-power.”

ON THE HISTORIC CONTROL OF WOMEN IN IRAN

“The primary slogan that I’m seeing circulating amongst the protesters is ‘Woman, Life, Freedom.” These are the three words that are the standard bearers of the protests today.”

“At least in Shiism, the idea of the political leadership of theocrats was quite unheard of until Khomeini took power in 1979. The way he assuaged the theocracy in Iran, the mullahs and the religious leaders in order to take power, was to give them the lives and bodies of women. A woman’s right to divorce. A woman’s right to deal with her body the way she wanted to. To have a say over marriage, these were all decided within a secular legal system in Iran under the Shah.”

“Khomeini’s immediate action was to fire female jurists from the secular system and to give the legal decision on marriage, divorce, abortion, the right to have a say about the second wife, to male jurists.”

“There is a sense in which Iran’s standing as a nation, as an Islamic nation, as a political unit, is hinged on the lives and bodies of women. This needs to be underscored. This, I think, is the point of this movement and the slogans that they’re using.”

Negar Mottahedeh is a professor of gender, sexuality and feminist studies in Trinity College of Arts and Sciences at Duke. She has written books on the history of reform and revolution in Iran, and the uses of various media in protest.

Mohsen Kadivar is a research professor of Islamic studies in the Department of Religious Studies at Duke. He was imprisoned in Iran for his political activism and has been in exile from the country since 2007.
mohsen.kadivar@duke.edu

Bruce Jentleson is a professor of public policy and political science at Duke University. He served as senior adviser to the U.S. State Department Policy Planning Director from 2009-11.
bwj7@duke.edu