For Ralph Bunche scholars, nerves give way to an intense and rewarding experience 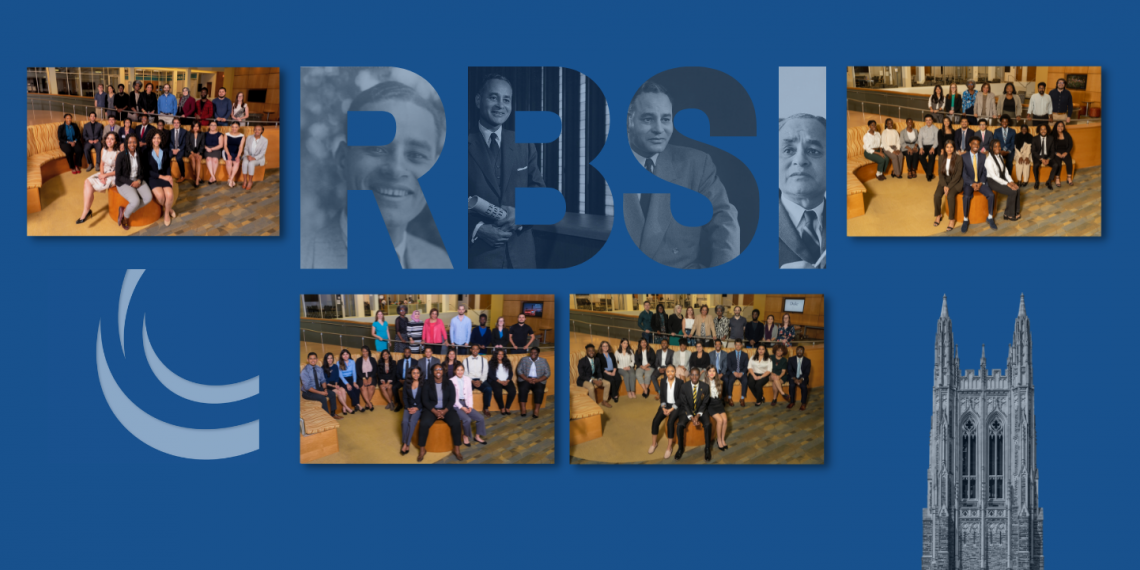 For 14 eager undergraduates who arrived at Duke from across the U.S. this summer, emotions were running high – but so were their expectations. Everyone gathered in Gross Hall on May 29 was feeling the pressure to make the most of a unique experience: participation in the Ralph Bunch Summer Institute.

“I was extremely nervous, especially when you start to compare yourself to others. You start to think, ‘well they go to a quote-unquote better school than me, or that they were the class president of this, or they had an opportunity for that,’” Georgia State University junior Morgan Lee-Blake shared.

“I knew that I was going to have this community of all students of color,” said Mercyhurst University junior Lily Smith. “I go to a predominantly white school. It's amazing, but it is not the same type of support (as this program).”

The Ralph Bunch Summer Institute (RBSI) has been accepting ambitious young scholars for over 30 years. The students take part in a fully funded, five-week intensive program that is designed to introduce racially and ethnically underrepresented undergraduate juniors to graduate studies in political science. Duke has been part of that mission since the summer of 2001.

Through the years, the program has always looked for resilience in its applicants, said Director Paula McClain, who is also the James B. Duke Professor of Political Science and Dean of The Graduate School.

A student’s GPA is not the most important part of the application, she added. Administrators instead focus more on the letters of recommendation and what that student has to offer.

“Most grad programs look at the student’s GPA,” McClain said. “But we try to see if they have had courses that were challenging or if they had any academic issues. Maybe that student wanted to be in STEM and (later) realized it is not what they wanted. That is why you do not just look at GPA.”

Though it is an amazing opportunity for young scholars, the program is also intense. The Ralph Bunche scholars have their entire days planned out for them – and the work doesn’t stop when the weekend comes. They engage in GRE exam preparation, complete lengthy readings for projects and class or work on improving their writing skills. Guest speakers join every lunch and dinner.

“Our schedule is mapped out by the hour, and I was very surprised. But in all honesty, confronting the amount of work has not afforded us as much time as I thought we would’ve had,” Georgetown University junior Joel Bossous said.

That’s because the programming is designed to channel the energy of these promising students toward doctoral studies, which is no easy feat.

In 1988, the two-year-old program was named to honor the legacy of Ralph Bunche, a pioneering Black political scientist, to increase diversity in the academic discipline. Decades later, the program has produced over 500 RBSI alumni. Many of these alumni are reshaping some of the core research agendas in political science. Now, newly admitted RBSI scholars are inspired by Ralph Bunche but also invited to engage with challenging research produced by mid-career RBSI alumni.

Chryl Laird is one of the alumni who is reshaping research agendas. Her co-authored book, Steadfast Democrats, won the 2021 Best Book Award from the American Political Science Association. She returns to Duke because she has developed co-authorships here, but also because RBSI programming invites alumni back.

Keeping those connections strong the pandemic was particularly challenging. It’s important for students to be back in person because community is a powerful benefit of the program, Laird explained.

All the hard work is worthwhile, past and current scholars agree, as they get to experience life as a political science graduate student for five weeks, network with professionals, build community and, perhaps most importantly, get recognition for their brilliance and potential.

“Working with people from other universities has broadened our perspectives in terms of modifying research interests, which will help with what we want to research in grad school,” California State University, Sacramento junior Neelam Bandhu stated.

“Having this institution at Duke is intimidating for minority students, I think,” said Central Connecticut junior Ryan Brooks. “It’s just you hear about Duke, and you don’t think that those universities are for you. So when I did get in it was surreal – and I feel like I belong.”

That sense of belonging is intentional, as program administrators aim to identify talented students and bring out the best in every individual.

“A lot of students do not realize that there is a profession as a professional political scientist and you do not have to be an academic, there are many ways that students can use a Ph.D.," Director Paula McClain said. "We hope that we found something in each of the students and that they will find something that will serve them well if they decide to go onto graduate school.”

Nya Lichaé McCray is a rising junior at North Carolina Central University who recently completed an internship with Trinity Communications at Duke.