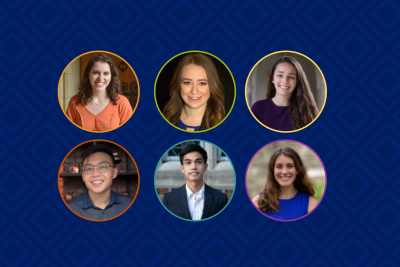 Six members of the Class of 2022 have been named to the inaugural class of Nakayama Scholars.  Juniors Sydney Albert, Carlee Goldberg, Erica Langan, Yi Xian “Lyndon” Lee, Ahn-Huy Nguyen, and Micalyn Struble were chosen for their stellar academics, leadership and demonstrated commitment to a career in public service.

The Nakayama Public Service Scholarship is part of the university’s efforts to encourage students to use their Duke experience to engage with the large challenges facing communities around the world.

The students represent 12 disciplines across Duke’s academic departments as well as a variety of future careers.  “The Nakayama board struggled to choose the scholars from an incredibly talented and brilliant applicant pool. We are extremely pleased with our inaugural class,” said Chris Simmons, associate vice president for government relations and director of the Nakayama program.

In addition to paying one half of their tuition for their senior year, the scholarship includes a year of programming targeted to guide the students in fulfilling their interest in public service. The program will be administered through the Office of Undergraduate Scholars and Fellows, which will allow the Nakayama Scholars to participate in the wider community of merit scholars at Duke.

“This program aligns seamlessly with Duke’s commitment to teaching, research, and service. The students in the inaugural class are brilliant, ambitious, and conscientious.  They have already demonstrated a strong propensity to positively impact their communities,” said Martin Smith, Dean of Academic Affairs for Trinity College and a member of the Nakayama board. “I cannot wait to work with them and see how they further employ their talents and gifts to embody Mr. Nakayama’s vision of service and helping others.”

The program is funded by an endowment made by Yukio and Toshiko Nakayama. Yukio Nakayama was a Duke graduate of the Class of 1941, who served in the US military during World War II For the rest of his life, Nakayama dedicated his life to public service, in both a long career as director of Weapons Program Evacuation and Management Systems in US Naval Ordinance, and in helping numerous young people further their education.

Sydney Albert is from Bethesda, Md., and is majoring in psychology, education, and child policy.  She is passionate about addressing education inequities and during her time at Duke she has served both as a volunteer in preschool classrooms through JumpStart, and as a researcher for Rebound, Alternatives for Youth.  She has served as an Equity Fellow for Children Now, and has worked in the Gaffrey lab, connecting early experiences to the developing brain and its consequences on mental health.  Sydney plans to be an elementary school teacher, and would eventually like to work in an education think tank, advocating for research based policy changes.

Carlee Goldberg is an A.B. Duke scholar from Parkland, Fla., double majoring in political science and history.  On campus, Carlee is an associate justice for student government, a peer adviser, a Hart Leadership Fellow and a 2021 Truman Scholar. Outside of Duke, Carlee serves as the President for the Triangle Debate League, an organization aimed at increasing access to speech and debate opportunities in the triangle area.  Her passion is at the intersection of juvenile justice, reducing gun violence, and increasing civic engagement.  Carlee plans to pursue a law degree and spend her career working to develop community-led solutions to reduce gun violence.

Erica Langan aspires to earn an MD-PhD degree to become a physician-scientist focusing on stem cell biology and regenerative medicine while also contributing to policy efforts to identify and address social drivers of health.  The Cincinnati native is a Huang Fellow majoring in biology and pursuing the Science & Society certificate.  She has done research into lung cell regeneration in the Tata lab, and as a member of a Bass Connections team, researched disparities in knowledge and access to palliative care for rural populations.  Langan is service chair of the Duke Undergraduate Chapter of the American Medical Women's Association, VP of Durham Outreach for Duke GANO, a Duke Children's Ambassador, and a violinist in the Duke Symphony Orchestra.

Lyndon Lee is majoring in computer science and statistics, with a minor in history from Singapore.  Lee studies how public and private entities can work together to solve policy challenges.  Lee is interested in inclusive industrial policies, public-private infrastructure financing, and startup development in Southeast Asia.  He has worked with various start up corporations, venture capital groups, and government agencies, and plans to work at the Singapore Economic Development Board.

Anh-Huy Nguyen is an economics and mathematics major from Annandale, Va.  At Duke, Nguyen was a member of a Bass Connections project focusing on economies of care, and he also participated in Duke Engage in Miami, where he interned at Catholic Legal Charities, an immigration law firm for low-income individuals. Nguyen plans to obtain a Ph.D. in economics to study educational and economic mobility, public finance and the economics of education.

Micalyn Struble is studying public policy and computer science. She hopes to serve as a public defender and otherwise work to dismantle the harms of the criminal legal system. At Duke, she does bail reform research at the Wilson Center for Science & Justice at the Duke Law School and cyber policy research at the Sanford Tech Policy Lab. Off campus, she works with the Religious Coalition for a Nonviolent Durham, striving toward positive reentry experiences for formerly incarcerated people.

The students were selected by the Nakayama board. In addition to Simmons, the members include: