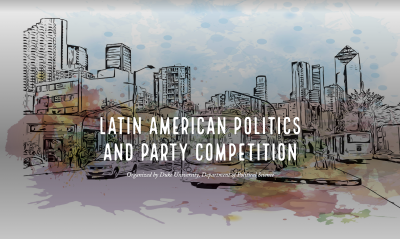 Hosted virtually at Duke between May 17-20, this version of the annual Frontiers of Political Science conference scholars from all around the world debated some of the main issues affecting parties and party systems in Latin America.

In most Latin American countries, parties are confronted with even more skepticism, cynicism and mistrust than parties in other regions of the world. As a consequence, political parties in much of Latin America have been highly fragile, volatile vehicles of political mobilization. This has led to common criticisms that revolve around parties engaging in corruption;  a politicization of public policy; an inability to deal with crime and a failure at mobilizing voters under party banners.

The conference was organized around five five panels that brought together professors from different generations and Graduate Students from at least 20 universities and research centers. All participants either presented work in progress or provided comments to these working papers forging connections between participants and allowing participants to receive feedback for leading scholars in the field. The conference also helps the professionalization of our graduate students in terms of presenting their work and commenting constructive comments to other peoples’ work. Along with Herbert Kitschelt, the conference was organized with the help of students from the department of political science at Duke, UNC - Chapel Hill and University of California San Diego.

On day one, our participants presented research on how corruption affects the formation and growth of political parties, through three important channels. First, we looked at collusive corrupt arrangements that may increase the incidence of lethal political violence, and how audits decrease political assassinations by decreasing corruption. Then we discuss the role of political favoritism in public procurement, and well trained bureaucrats ensure that connected firms (i.e., those favored by political networks) obtain procurement contracts. Finally, we explored the issue of political donations, and the behavior of two different kinds of donors: those who see their donation as an investment --and expect to gain something in return-- and those who see instead as an opportunity to express their support for a given candidate. The papers presented covered a variety of Latin American countries: Brazil, Colombia and Guatemala, in the relatively understudied Central American region.

The second panel discussed the idea of a “truncated” or incomplete welfare states that hedge citizens only precariously against critical existential risks of loss of employment, illness, inability to work due to old age, or death of the family breadwinner. We looked at how, under what circumstances and to whom the state provides social policy. Furthermore, we discussed the role of crime and its effects on vote choice and participation. Both vulnerabilities reflect constraints of state capacity in many Latin American countries and mutually reinforce each other: The economically insecure also tend to be most intensely exposed to the threat of crime.

Party identification, party mobilization and political participation were the main topics of the third panel. We focused on why it has been so difficult to create party identification in this region and how other social attributes lead to differential rates of political participation. We explored how trauma during migration affects civil engagement, how charismatic ideologies have effects of vote choice and how representation in Congress leads to growth and institutionalization of political parties.

During the fourth panel we explore the causes and consequences of political polarization in Latin America. First, we focused on the importance of ideological conflict in the early XX century, and how Latin American political party systems took fundamentally different routes depending on the degree of party-based ideological conflict that they experienced in that period. Then we entered into a discussion of the relation between polarization and populism. On the one hand, the most recent wave of populist leaders in the region came to power in a context of low polarization: mainstream political parties had more or less converged on a similar policy agenda and failed to deliver on their promises of growth and stability. On the other hand, populist leaders introduced a new kind of polarization once in power --one that arguably helped them remain in power and prevented opposition parties from mounting successful campaigns to defeat them in power. This new kind of polarization was based on personalistic appeal rather than policy.

The last and concluding panel of the conference was a roundtable with young politicians from Brasil (Federal deputy Tabata Amaral), Chile (founder of Revolución Democrática Carolina Pérez Dattari), and Guatemala (Congressman Samuel Pérez). Our objective was to learn about the challenges encountered by Latin American political parties from practitioners, by talking about their experiences and perceptions. In particular, we learned some of the issues around the lack of representation from women and ethnic minorities in politics; the challenges political machines pose to new and young parties; and the difficulties of party building.

This conference was made possible with the help of Duke’s Political Science Department, Duke’s Center for Latin American and Caribbean Studies, and Duke/UNC Latin American Politics Working Group.